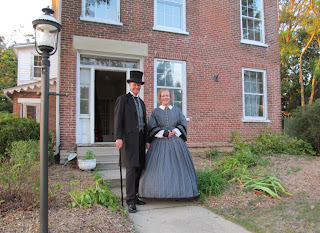 "Mr. and Mrs. Bela T. Hunt" greeted visitors to their home--which is the first brick dwelling to have been built in St. Charles--for an open house tour at 304 Cedar Avenue on Thursday, September 6, 2012.  Bela T. Hunt arrived in St. Charles 176 years ago this month at the age of 23.

B.T. Hunt purchased site unseen half the interest in a town site called Charleston--which St. Charles was named until 1839--as well as half interest in the water rights, power mill, and company store from his brother's employee who had recently returned from a trip in Chicago.  The employee had met Ira Minard when Minard was working in a hotel in Chicago.  B.T. Hunt was instrumental in establishing the new town along with Minard and Ferson.  The men formed a company called Minard, Ferson and Hunt which continued until the deaths of Ira Minard in 1867 at the age of 67, and Read Ferson in 1865, at the age of 56.

Not only is B.T. Hunt credited with having built the first brick dwelling in St. Charles, circa 1841, but he also is credited with building the first frame building in the town circa 1836--the company store--along with his partners Ferson and Minard.  This was the same year they also completed the dam.  In 1837 B.T. Hunt purchased the interests of David Howard and Nathan Collins small hotel.  He added to the hotel and reopened it on July 4, 1838 with the first ball to be held in the new town.  On March 21, 1838, the first election in Charleston took place in this same hotel.  B.T. Hunt eventually traded the hotel for land in DuPage County with Daniel Clark.

B.T. Hunt erected two commercial buildings in downtown between 1838 and 1839 and established a mercantile business of his own in 1838.  The Chicago Directory listed him has having a business of feather beds and mattresses on South Water Street.  He also operated a tannery, paper mill, and hardware business--the most prosperous of them being the paper mill.  In 1845 the mill was erected and said to be the first of its kind northwest of the Ohio River.  The company was known as Hunt, Butler and Hunt in 1846.  The mill on the east side of the river was enlarged and improved and a second mill built on the west side of the river in 1847 which then burned in 1856.  The mill was rebuilt even larger and employed 80 people.

B.T. Hunt also built a tannery on the east side of the river and operated it until 1861.  Hunt's occupation was listed as a harness manufacturer in The Kane County Directory of 1859-60.  Hunt's endeavors also took him to Chicago where he operated a shoe business on Lake Street.  Hunt also operated a hardware business from 1858-1890 and was listed as being in hardware, stoves and tinware as well as a farmer with 147-1/2 acres in The Kane County Gazetteer and Directory of 188-1890.

{This information was compiled from the National Register of Historic Places Inventory Nomination Form and Reflections of St. Charles.}

Until we meet again, may God hold you in the palm of His hand.
(An old Irish blessing)